This post is about how by changing my approach to a problem from trial and error to a more scientific method, I was able to do in 30 minutes what I hadn’t been able to do in 3 days.

Figure out exactly how UICollectionViewFlowLayout works and use that knowledge to resize cells on rotation.

I had been working on minor updates to FractalScapes and Daisy both of which use the same style of UICollectionView for presenting the fractal plants & real plants to the user. Since both FractalScapes and Daisy deal with plants, the collectionViewCell was designed to look like a typical plant information stick a plant buyer finds stuck in the pot of a new plant. These sticks usually have the name, a description and technical information for the plant. Something like the image of plant markers … 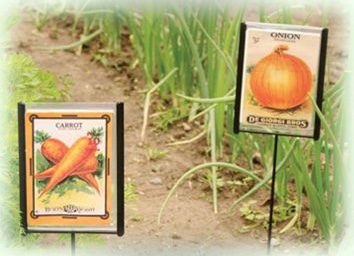 A new feature was to have the UICollectionViewCells arranged so they would be centered for all screen sizes & orientations. In addition, it would be nice if the cells auto-resized themselves within a certain range to maximize the use of the screen space. The existing version just changed the collectionViewLayout insets rather than resizing the cells. This left lots of intra-cell space on a 7 Plus. Implementing resizing cells on rotation didn’t seem like a lot to ask of the amazing collectionView with its all singing all dancing UICollectionViewLayout class. I figured it might take an hour to implement by invalidating the layout in the UIViewController call to viewWillTransitionToSize:withTransitionCoordinator: and implementing the size delegate. Similar to what I had already done for the edge insets.

Boy was I wrong.

After reading UICollectionViewLayout documentation numerous times, the internal workings of the framework were still as clear as mud. So the first attempt was to use a brute force call to [UICollectionViewLayout invalidateLayout] within the call to [UIViewController viewWillTransitionToSize:withTransitionCoordinator:]. It seemed to work perfectly and took as little time as expected. But then during testing, it would randomly crash on rotation! Sometimes taking 10 or more rotation cycles before crashing. Every time, the crash had none of my code in the debugger stack, only a UICollectionView call to an NSDictionary where it seemed it was looking up cached visible cells.

Ok let’s spend the next 3 days proving my ignorance of the inner workings of UICollectionViewFlowLayouts by randomly changing stuff like a room full of monkeys writing the next great app? Let’s make offerings of Hawaiian coffee to the coding gods. Maybe the app doesn’t need this feature? Maybe no one will notice the little lonely cells in the big room? Let’s just give up!

Somehow after 3 days of trying magical thinking, I came to my senses and decided to try the scientific method.

Yay, so in a matter of a few minutes, we now know when the UICollectionViewFlowLayout expects to invalidate a layout on bounds change. Next is to find out what kind of invalidation context it triggers?

Then in your UIViewControllerFlowLayoutDelegate protocol implementor, return your new sizes. In my case, I implemented a class for the resizing and other related reusable functionality.

Lastly, if you wanted to just invalidate the sizes for the layout manually, you could do something like:

iPhone 7 Plus result of resizing after each bounds change. The resizing algorithm adds a little height as well as width when there is more room.

I am really excited about the new features I have added to FractalScape. My soon to be released Interactive Fractal editor.